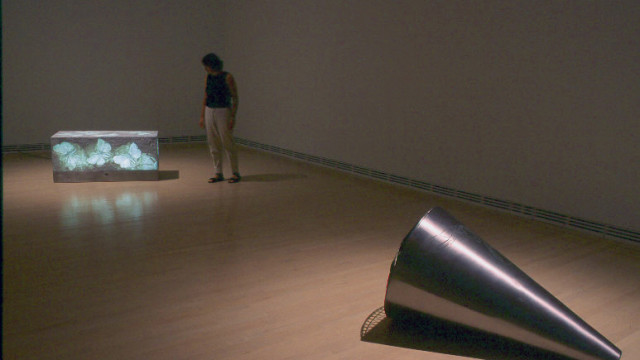 Echosense was made with the participation of visually impaired individuals, using echolocation as a device to connect the sophisticated movement of the bat and the innate abilities of the visually impaired to navigate their environment. This technology is integral to the meaning of the piece in that the visitor operates and controls the sound and light by their position in relation to each sculptural unit. A control sensor in either sculpture is activated by motion which signals the transducer to emit continuous inaudible bursts of ultrasonic sound. The transducer then switches to listening mode, waiting to receive an echo and signals the sensor. The sensor measures the time elapsed between transmitting a sound and receiving an echo, and detects movement by recognizing that an echo was received with a different time lapse than one previous. When this occurs, the control sensor activates the sound or light for a fixed time. By simulating echolocation in an art work there is an intriguing symmetry between the gallery and natural worlds. EchoSense targets visitors using sound to comprehend the world just as bats pursue moths in the darkness of the night.