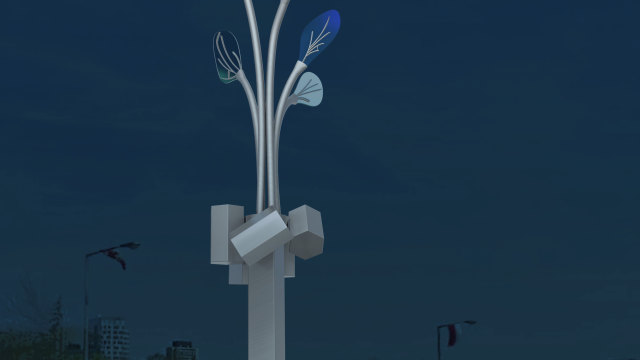 Beehive, Housefly and Butterflybarn are a series of sculptures that embrace the core idea of urban sustainability and  incorporate essential elements that focus on a growing and changing community. Each sculpture provideds a formalistic vertical column around which a ring of architectural forms cluster at the top. In Beehive for example the hexagon shape is elongated and juxtaposed so that there is a rhythm to the circular movement. This movement is repeated with the triangular and cuboid forms found in Housefly and Butterflybarn.  Moving upward from this architectural ring into the open sky is a grouping of gently curved stems in varying lengths, at the top are iridescent and transparent wing forms, made from strong flexible iridescent polycarbonate material. The abstracted wing forms are constantly changing and reflecting prismatic colour, contrasting the transparency of iridescent polycarbonate with a polished steel surface.